Old BMWs roam the streets of the Senegalese capital. It appears to me, as if the roads of Dakar are filled with Europe's recent past, the city lending a second life to cars from Germany or France. Family limousines, disused years before, are transformed into Senegalese taxis, working their way through the dusty and sandy streets of the southern metropolis, painted, lucky symbols above each wheel, windows shattered, taped together - or missing completely. 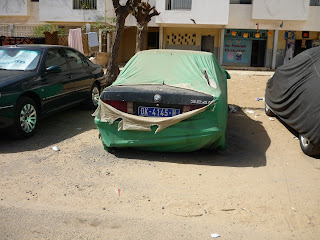 On our walks through the city, we pass a street corner, an empty lot near Boulevard Canal IV, where old BMWs are being repaired. I want to know more about this used-car-economy in the city. And I wonder, how the production of knowledge works - how is it possible to repair a complicated, computer-driven vehicle on this dusty plot, without even a car-lift? As we don't speak Wolof, we ask actress Lisa Dior to join in and translate for us. I had a lot of questions prepared, but the interview takes a different path, full of surprising turns, orchestrated dramatically by the mechanic and owner of the BMW repair workshop. 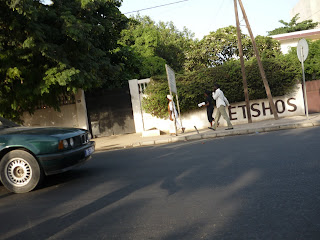 CS: How did you start to work with BMW? Why not a different brand?
(Mechanic: starts to talk)
Translator: He said that he started in 1983, and he started with some auto-brands. Everyone was doing the same thing, and there was not a lot of people interested in BMW. Then he thought, if he start with BMW, he might have enough money, and get many orders.
(Mechanic: continues)
Translator: He says, that he had learned for 4 years, and he learned by - ...avion... how do i say it... - by learning to be an airplane mechanic. I don't know if you understand... He learned being a mechanic - but for plane! Not by car.
Margit: That's funny!
Translator: He said that there is a lot of connection, because whenever you have something on a BMW, you have it on a checkboard by plane. There is a lot of similitude.
CS: Ok! Wow!
Translator: He said that his teacher was a ... he had to travel, cause he was going in Ivory Coast, and one of the biggest house of BMW called him and they wanted to work with him, but he had to repair one car before. It was the test. I don't know if you understand? That was the test. And he succeeded. And there was one car that had been sitting there for one... year - and no one could repair it. And he was the one who came and repaired it. And that's how he get the job.
Margit: So funny! It's funny!
Translator: Yeah!
(Mechanic get's a call on the mobile) 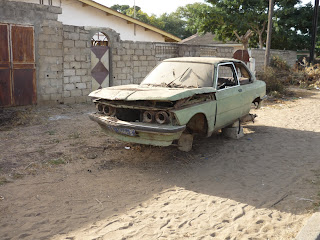 Margit (to translator): Super!
Translator: Are you sure?
Margit: Yes. It's so interesting. No one will believe it in Germany. It's so special! It's good! And you do it good! You translate really good. Such a nice woman and these boys, it's also a nice picture...
Translator: Haha!
Margit: If you have a beautiful woman in your film, it's always... important.
Translator: He's talking about his job right now...
(Mechanic finishes talking on the mobile and continues)
Translator: He said that, when they asked him what had happened to the car, he told them to change a lot of pieces, parts, and then he made the bill, and that was around three million... and they bring the parts from Germany... and the car was for an arab, who was making some "formule A" - I think - cause that was a sport car. And they said: we won't take you right now, you can not start the job right now, because it's unbelievable! We got to call the arab, to come and test the car with you. If everything is alright with it - you can start right now. And the arab guy take the plane, they test the car for two hours, and everything was cool - and that's how he started to work.
Margit: Haha! Interesting! Unbelievable! Wahnsinn!
Translator: And after that there was a seminar. That was supposed to happen in Ivory Coast. There was a lot of people from a lot of countries in Africa, and they had two teachers - a German one and an Australian one. He said the name but I forget...
CS: A Seminar?
T: Yes. And at the end of that, they had a test, and he was the second at the end of this time. And there were a lot of countries - 16?
Mechanic: 60.
T: Sixty persons, from every country in Africa.
Mechanic (speaking German): Urkunde!
Margit: Ah! Urkunde!
T: He always went to Ivory Coast, to learn something, and 1994, they were bankrupt. And they were obliged to close. That's how he lost his job.
CS: O.K.
T: He's talking about Motocycles. They were coming in parts. And he was the one who was making it perfect.
T: In 1992, there was a big conference here by the islamic countries, and the government asked them to prepare 15 BMW 7 Series. But later on, the government did not respect the engagement, the contract, because some islamic country gave them some cars. So they didn't pay them, that's why the company closed. So they had a lot of Motos, and a lot of cars here, and they didn't know how to use it, because only big structures, big companies or the government can afford such a car at the time. Like the governement or some big institutes. And, by the way, they didn't have the money to pay their employees, to pay their personals, to pay their bills, that's the - how do you call it, bankrupcy.
Margit: Unbelievable.
T: He says, that because of that, he took all the money he had and he opened here. That was in 1994.
T: And he say, in 2000 a big company that repairs BMWs opened here. And they asked him to come and work with them. But they are not thinking the same way, with the same mind, the same philosophy, they didn't see the same by the same, and that's why he said "no". He says, he prefers to stay here, working for himself, make the young one's a chance, cause they didn't have the chance to learn at school. So he works here to give them chance to learn something, and can have a family, too.
Christoph: So young people they learn by starting to work here?
T: He is helping them, so they learn by starting by touching and seeing what he's doing. And he says, the chance he had - he never went to school - not to french school, to arabic school - but right now, he can read french notice... instruction sheets from BMW, he can read his newspaper, he can read whatever he wants - but he didn't learn it, he learned it by: someone said "this is this, this is that", and that way he learned it. And he says, this chance he'd got, there are many people in this country who ain't got it. And that's why he wants to help that young one's, to do something.
Margit: Super!
Christoph: Ja.
Margit: Das ist Super. Very interesting. 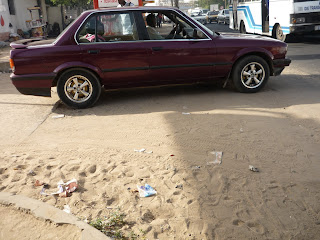 T: He said, that time when he was working for that guys, he had the chance to go to Austria, to Vienna. But the problem was - his boss, he didn't want to let him go. Because he said - the boss said at that time: If he let him go, he'll lose him. Cause he will see them, and make some other business. And he said, maybe that's what god wanted, cause here whenever we say something, we say: that's what god wants. And he says that, what god wwanted is for him to stay here and maybe help the others and give them a chance.
Christoph: Yes.
T: He says that, maybe you get the money and you get the chance to see what happened, where is the problem with the computer and all that, but he we aint got that possibility, but he said that god give us mind, to think, and try to know what's happened and all that.
M: Das ist gut. Please tell him: I also learned all by doing, not in school. So I understand that.
Mechanic: Voilá! (continues in Wolof)
T: he says that he's very glad to meet you, because here nobody cares about them. And he's very glad you cam and see what he's doing, and he is very happy to explain you how it goes, all that stuff.
M: Thank you! Merci beaucoup, Monsieur. Tres interessant!
T: he say you are always welcome. Whenever you want something, or you want an interview, you can come. 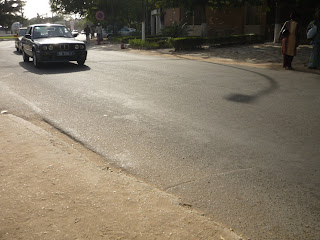